In order to open the East and strengthen diplomatic relations, László Horváth, Honorary Consul of Kazakhstan, gave a reception in honor of the Kazakh Foreign Minister on Thursday. Muktah Tileuberdi attended a meeting of the Strategic Council established by the Hungarian and Kazakh governments on Friday and will also meet with his Hungarian colleague, Foreign Minister Péter Szijjártó.

The Hungarian side was represented at the reception by Mihály Varga, Minister of Finance, Sándor F. Kovács and Sándor Fazekas, Members of Parliament, András Baranyi, Deputy State Secretary for the Development of Eastern Relations and Mihály Gálosfai, Hungarian Ambassador to Kazakhstan. In his greeting, Mr. Consul, in addition to assessing the joint successes of the recent period, emphasized the challenges of the future, and the reception was mostly about the opportunities for cooperation. For example, the rehabilitation and development of the Záhony transhipment area was discussed, which is being carried out by a recently established consortium called the Záhony Logistics and Industrial Zone (CELIZ), supported by the Hungarian government, led by the Hungarian MÁV-REC Kft. The investment prepares for the implementation of a strategically important, innovative logistics, railway and freight hub in Europe, which is an important element of the silk road, which is strongly supported by the Chinese state, and aims to involve Hungary in the development of east-west economic and trade routes. Among other things, it was stated at the reception that as the route of rail freight traffic from China to Záhony also affects Kazakhstan, even closer strategic cooperation between the two countries could be opened in the planning.

As an honorary Kazakh consul, László Horváth has been cultivating Hungarian-Kazakh business, economic and cultural relations for more than twenty years, during which time he has achieved serious results in cooperation between the two countries. Its diplomatic success is indicated by the fact that in the course of its activities it helped many Hungarian companies to enter the Kazakh market and provided support to Kazakh companies to introduce themselves in Hungary. The Honorary Consul stressed at the event that he was committed to strengthening relations between the two countries.

Press releases related to the event can be found at this links below: 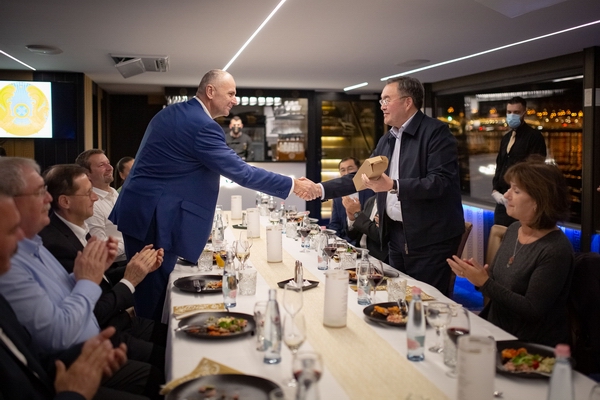